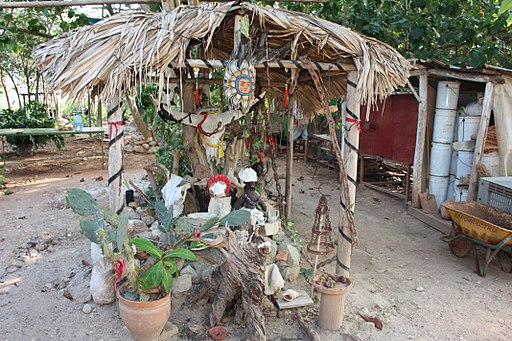 Santería developed in Cuba during the 19th century and has continued to spread in America, particularly in large cities like Miami, New York, and Los Angeles primarily through Caribbean island immigrants. Originating in West Africa among the Yoruba, brought to Cuba by captured slaves, the “saints” tradition is named by participants as Lukumi (Lucumi) or Regla de Ocha (Rule of the Orisha).

In this tradition, the cosmos is animated throughout by ashe, a dynamic vitality or power that abides within and between all beings and aspects of nature through a constant process of interaction and exchange.

Ashe is always in motion, seeking balance, and is particularly embodied in a variety of beings:

The world, as a unified whole, has two primary aspects: Orun (the invisible, sky) and Aiye (the visible, earth) united by ashe through Olodumare, the Owner of All Destinies.

The Orisha are powerful multidimensional beings, aspects of Olodumare, archetypes of nature that can act as guardian protectors for correctly initiated human beings.

The Orisha known as Orula presides over divination in contrast to the Orisha Eshu, the spirit of unpredictability; Orisha of earth include Chango (thunder) and Yemayá (the sea). The Ajogun, “warlords” are spirit who represent forces that challenge balance, such as death (iku), disease (arun), afflictions (ese) or “big troubles” (oran). Other spirits also inhabit nature and can be appealed to particularly in the preparation of herbs or other sacred objects used in ceremony.

Most of the major Orisha also have counterparts with various Catholic saints; for example, the Orisha Obatalá, representing peace, calm, and purity is associated with the Virgin Mary. Ritual ceremonies take place in a house-temple (casa de santos) also known as ilé, usually made in the homes of initiated priests and priestesses. Ilé shrines are built to the different orichás which creates a sacred space for worship, called an igbodu (altar).

As for human being, after living a long, natural life with a good death, a departed individual may become an ancestor (egun) and live in the invisible world, watching over his or her living family. Those best qualifying for ancestor remembrance are those who “fulfilled their destiny” (as in Yoruba belief), contributed to the community, lived exemplary lives and do not die young or act in cruel or criminal ways. Ancestors are believed to reincarnate usually into their family lineages as a grandchild; however, it is also possible for reincarnation outside the family lineage.

Before rebirth, ancestral spirits restore themselves in the “good heaven” (orun rere) while watching over the family and some may become revered Orisha. Individuals guilty of crimes, cruelty, theft, slander, of using magic to harm others are not reborn but sent by Olodumare to the “bad heaven” (orun bururu), the place of broken pots which cannot be repaired, and are thus unable to reincarnate.

The concept of the “person” in early Orisha tradition included a body, the ori (“head”) or seat of consciousness and personality, and the eleda or “guardian spirit”. In later development, the eleda has diminished and been replaced by a believer’s protective Orisha or guardian ancestor spirits. Each ori is given a specific destiny (iwa) by Olodumare (as in Africa) when it is created which must be fulfilled in life, usually requiring multiple incarnations before becoming an ancestral Orisha. Every ori is also “a child of the Orisha” meaning that every soul has a specially designated Orishas over it.

Through divination rites it is possible for a person to attain a reading on current circumstances in relationship to their destiny; and through dedicated actions, it is possible to change or enhance their destiny. The departed (egun) may visit the living in dreams or imaginative visions, to provide guidance and give warnings; simply divination techniques (obi) can also be used to solicit advice. Such beliefs are all consistent with African traditions.

Family members communicate with the departed through prayer and also through simple family altars consisting of a lit candle, a cup of black coffee and a bit of favorite food.  Infertility is considered a curse that prevents reincarnations and children dying before birth (stillborn) many be an ancestral ori who prefers heaven or those infants who die immediately after birth may be abiku, a transient, trickster spirit who merges with the embryo but leaves when born, resulting in death.

A proper death after a long life is assured through the Itutu, a divination ceremony that meant to ease the soul, assure it, and clear away all negative ties to others during the just ended life; it can also assure that the soul not be reincarnated but remain in the ancestral realm, unless the soul chooses otherwise to be reborn. Similar beliefs can be found in Palo Monte (Afro-Kongo-Cuban) where all ancestral spirits become deities and incarnate in mediums through possession rites; also found in the Trinidad Orisha (Shango) traditions and in the Espiritismo tradition of Puerto Rico, all of which have American practitioners.

The Life and Afterlives of Che Guevara