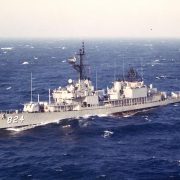 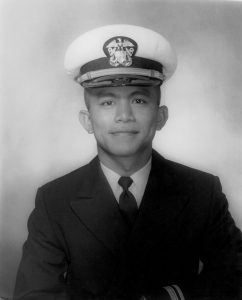 The Cuban Missile Crisis of October 1962 occurred during the Cold War and resulted from a dangerous confrontation between the United States and the Soviet Union.  It was at this time that these two countries came closest to nuclear war.

At issue was the intention of Soviet Premier Nikita Krushchev to place nuclear missiles in Cuba to prevent a possible American invasion of the island.  The US responded with a naval blockade (designated “a quarantine”) to thwart Soviet intentions.

In November 1962, the U.S. ended the naval quarantine.

Journal of naval officer Ensign Joseph Gamboa serving aboard Navy destroyer USS BASILONE (DD-824) in and off Guantanamo Naval Base during the Cuban Missile Crisis of October 1962:

22 October
After a long build up (the deployment of troops to this base [Guantanamo Naval Base] and the evacuation of dependents), we find that our suspicions at being in covering position for shore-fire support based on plans for a naval blockade and a showdown in Cuba were justified. Looks like we were really sitting on a volcano.  How did we get caught here at just the right time to be in the middle of it?

My first thoughts go to the situation of vast geographical separation of family; then the thought of the horrors of war in which I may be called upon  to watch my sailors dying at their stations.  Our only course now is to watch and wait and to make ready for the coming of the host.

23 October
Stood into the bay [Guantanamo Bay] and refueled and re-provisioned.  Earlier just after reveille [6 A.M.] we went to our battle stations for a close-in bogey [unidentified air contact] that proved to be a friendly [airplane].

24 October
Had another bogey flurry last night during the midwatch [midnight – 4 a.m. shipboard watch].  We have been manning the guns on a 24-hr basis on Readiness Condition 3

30 October
Had been patrolling Gitmo Bay for possible call for fire [naval gunfire support] in shifts with other units.  Today our stateside relief arrived and we are enroute to the VaCapes Op-Area [Virginia Capes offshore operating area] for maneuvers with TG BRAVO [Task Group B].

2 November
Chopped [CHanged OPerational control] to TG 136 and at this point it seems that we are no longer just playing at ASW [anti-submarine warfare].  Our mission now seems to be a part of the blockading squadron.  We just act like pickets sitting in the dark at night challenging any and all surface ships.  Although we left for a 2-day stop-over in Norfolk this weekend, we find we are not going to get back to port in all probability until 22 November.  It was hard to take, but not really that bad, especially for us bachelors.

11 November
Had the midwatch this morning and enjoyed it very much.  It was terrible for night warfare – moon full, night clear, and calm seas. Idyllic.  Seems things are beginning to slack off but the fact that we are still here seems to indicate some tension.

20 November
Returned NORVA [to Norfolk] after a long haul for upkeep [period of shore leave and maintenance].