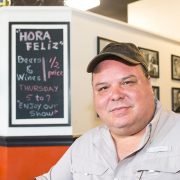 An Interview with Manuel Rodriguez, owner of Cortaditos Cuban Cafe

I’ve come today to talk to Manuel Rodriguez, owner of a Cuban restaurant in Charleston, “Cortaditos Cuban Cafe.” He greets me with a warm smile and invites me to take a seat with him. As I start to look around his cozy restaurant and we start our conversation in Spanish, I feel closer to Cuba and eager to learn more about its food.

Daniel Delgado (DD): Hola Manuel, thank you for meeting me and doing this interview for the Cuba Project. When did you start to getting interested in cooking?

Manuel Rodriguez (MR): I started when I was 14, watching my parents cook, especially my father, as he was a better cook than my mother.  My father’s family is originally from Orense, in Galicia, Spain. My mother’s family is from the Canary Islands, and her father was from the Basque Country, all in Spain. Cuban food is greatly influenced by Spanish food, using olive oil, olives, capers, red peppers… Cubans cook a lot of Spanish food, like Galician soup, fabada, and beans.

MR: Yes, from seeing my parents and grandparents cook at home. The cooking smells are what caught me. I asked them to teach me! When I was 15, I was already cooking by myself and I used to cook my own food to take to school. I started cooking roasted pork, and learned how to marinate it. To me it’s a natural process, and I love it. I truly enjoy cooking, while enjoying some wine.  I love trying new things and experimenting.

DD: What brought you to Charleston?

MR: My wife and I were mulling over leaving Miami since it is already too packed and the quality of life is not what it used to be. You go to the movies and you have to deal with really bad traffic; you want to go to the beach, and it’s the same pain. You waste a lot of time in your car. Traffic is terrible. That’s why many people from Miami travel to the islands, to other places, or they go on a cruise to relieve their stress. To be honest, Miami is not what it used to be. We had friends here in Charleston that always told us to move here, and we finally moved in January 2015. I had never owned a restaurant before and used to work as a pharmacist and later in real estate. But when we moved here, I wanted to open a restaurant, and I found this place. I preferred a downtown location, but the places were either too big and costly, or too small. I found this place and we had to put it together from scratch, as it was an empty space. It was my opportunity to combine my business experience with my love for cooking. Charleston is complicated, but business is going well, thank God!

DD: What are the main elements of Cuban cuisine?

MR: Rice and beans are staples, as are legumes like boniato (sweet potato), malanga (taro), yuca (yucca), and ñame (yam). These 4 root plants are native to the Americas. Plantains are well liked in Cuba and the whole Caribbean. Not to forget the papas (potatoes), and soups. Besides the Spanish influence, there is also a great influence from African food. They brought okra, other legumes, spices such as cumin, and some soups they used to make with beef and goat meat. I was born in Santiago de Cuba, in the southern part, and that is where there are more Cuban blacks, besides La Habana. La Habana is full of people from different origins. My hometown is where the goat meat is the most popular, rather than in other areas in Cuba.

DD: Is it easy to find the ingredients to cook Cuban food here in the Lowcountry?

MR: Yes and no. You can get the spices, but things like Cuban bread you cannot find. Even in Cuba, it is hard to find someone that makes traditional Cuban bread. Cuban bread is made with pig fat and cooked wrapped in plantain leaves. But they do not do it like that anymore, because it is costly and hard to make.

DD: How is the reception of Cuban food here in Charleston?

DD: What are you serving in your menu here at Cortaditos Cuban Cafe?

MR: We now serve 4 main dishes. The repertoire of Cuban food is extensive, but since our space is on the smaller side, we have chosen these four dishes. We offer Picadillo, which consists of ground beef cooked with tomato sauce, bay leaves, green peppers, onion, garlic, oregano and dry wine. Ropa Vieja, which is shredder sautéed flank steak is prepared similar to Picadillo, also with dry wine. We serve Puerco Asado, which is a roasted pork dish that is very popular. And we also have Pollo Asado, roast chicken. These are all very popular dishes.

DD: How about drinks? Are there any differences between Cuban drinks and American drinks?

MR: We offer Cuban sodas such as Materva and Jupiña. Materva is made from Mate herb, and Jupiña is a pineapple soda.

DD: What can you tell us about Cuban coffee?

MR: When Americans try Cuban coffee for the first time they love it, and they come back for more! Colada is the Cuban espresso, but it’s stronger, roasted three times. We also have Cortadito, similar to the Spanish Cortado, but in Spain there’s more coffee than milk, and the Cuban Cortadito is half and half. And then the Cafe con Leche, Cuban coffee with more milk. Cuban coffee is well loved here!

DD: How about desserts?

MR: We have flan, which is a very international dessert, and also Tres Leches which is a cake that is more difficult to bake. These two are the favorites.

DD: Are we missing any other food?

MR: Yes! We make 9 different sandwiches. People’s favorites are the Cuban sandwich, the Media Noche, the Miami Sandwich, and the Pan con Lechón. For vegetarians, we have the delicious Havana Linda with Black beans, lettuce, spinach, tomatoes, mayo, and mozzarella.

DD: It sounds great! Anything else you want to tell our readers?

MR: Come and try something different. Come and experience Cuba through its foods smells and flavors!

DD: Thank you for your time, Man.

The Life and Afterlives of Che Guevara
Scroll to top