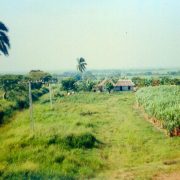 When the Soviet Union collapsed in 1991, Cuba lost its major source for fertilizer, pesticides and fuel.  Out of necessity, Cuba turned to organic farming, which has become an enduring staple of their economy.

In the broadest understanding of the word, organic farming is a method of agriculture that is based on modeling agricultural practices on natural systems. This means organic farmers, broadly speaking, tend to farm by planting a variety of diverse crops (polyculture) where these crops fulfill a variety of functions.  For example, planting legumes will help fix nitrogen in the soil; certain flowering plants will attract pollinators; and other plants will provide “green” manure for tillage in order to build soil nutrients.

Organic techniques recognize that the health of farming rests on the microbial health of the soil, so many farming techniques are geared towards building soil health.  These soil-building techniques range from companion planting to rotational grazing of animals to rotational planting of plants to applying compost to soils to leaving fields fallow for a season.

Organic farming typically requires more human labor, so it leads to higher levels of employment.  Organic farmers also attempt to utilize no synthetic chemicals, as these derive from fossil fuels and are seen as harmful to soil, plant, insect, and animal health.  This means organic farmers, ideally, would not use herbicides, pesticides, fungicides, or artificial fertilizers, or synthetic hormones or antibiotics with farm animals.  Organic farming is in many respects a rebuttal of “Green Revolution,” industrial farming methods that began in the 1940s and 1950s, which now account for how most people in industrialized countries get their calories.  However, the farming methods used by organic farmers today by definition mirror those of most all farmers pre-Green Revolution technologies and practices.

Organic as a term is now trademarked by the United States Department of Agriculture, so organic standards are set at the federal level.  Thus, there is debate within the sustainable farming milieu over what “organic” really means, and what farming practices count as organic, given USDA involvement.  Furthermore, organic farming as codified by the USDA is now a multibillion dollar per year business, leading to the development of “industrial” organic, where crops are grown as a monoculture using some allowed forms of synthetic compounds and are farmed largely by tractors with minimal human labor.

Historically, in the context of Cuban agriculture, organic farming would be consistent with the smaller scale, fossil fuel free form of agriculture, relying on indigenous farming knowledge, seed selection, rotational grazing, composting, and companion planting that typically defined small-scale organic farming in the U.S. prior to the 1990s, when the USDA officially defined organic practices.

The Journeyman: Colin Laverty ’06 in Cuba
Scroll to top